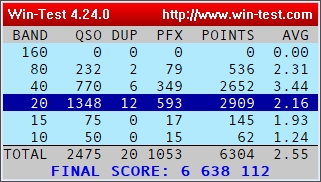 Took 2 days off for preparing/restoring the station. Managed to finish everything but when I sat down to the desk I felt wrecked physically. Did not feel really in shape either but looked forward this one so long was very exited, of course could not take any sleep.

Painfully SO1R operation with huge and continuous temptation for picking between CQ and mult S&P.

Still no real antenna for 15m as I counted almost fully closed band for this event but when the sunspots will appear again?

It’s never been needed to switch off due to storm yet so this was my turn. Please guess where is my QTH? Yes, in the middle of the “storm-eye”.

Had to disconnect everything after visible meteoric thunders simply could not risk the direct hit any longer. Took for 2 hours. Luckily enough with a minor off-time reshuffling I could save an hour to the contest end. No need to say before/after the storm 80/40m was simply horrible due to the QRN apologies for the loooads of repetition requests.

@SP9R, sorry man, I heard in traces the rest was the statics with trying to guess what’s going on the band. UBN will be interesting to see how my “signal extrapolation” worked.

However hands on heart this turned out great as this made me QSY to 20m for the last 2 hours where I ended up with a great NA opening.

It was interesting experience that a significant number of RBN hops appear with typical frequency offsets. Using 250Hz filter unfortunately depending where I’m sitting in the KHz the caller will fall out of the passband. Took a while until I figured this out guess I lost a bunch of stns as I assumed they called someone else… or have to try to find a rounded CQ frequencies.

It could be a lesson learnt that in similar situations repeating the number ONLY might increase the likelihood of the successful reception. It happened 9 out of 10 times that the counter stn sent “HA3LN, TU/UR 599″ … and lastly the number. It would be more effective only re-sending the serial without the rest cutting back the overall lead time of the period. No need to say 2/3 of times  the QSB was up for the “HA3LN, TU/UR 599″ part and blank for the serial figures.

YW4D was a nice surprise on 10m with very weak signal but managed to copy the serial out on the dead band. Thanks for the perseverance.

All in all this was a great fun with great rates and good condx with several take-aways.

This entry was posted in Contest. Bookmark the permalink.